How does source-to-source conversion with FWD work?

The core principles of the FWD technology and methodology are extreme automation and strict compatibility. FWD is designed to ensure you can convert, build, run, and test your application without having to hand-edit the converted code. This cycle can be repeated many times, and newer drops of the application's ABL code base even can be substituted in over the course of a migration project, without adding significant effort to the overall project.

How is this possible? Support for each legacy feature is built into the conversion and runtime technology. If something is missing or broken, it is fixed in FWD once, rather than duplicating this effort across every application. To date, FWD has amassed a sizable feature set which already handles a wide range of application functionality. This includes GUI and CHUI support with Direct-to-WebTM deployment, application server, database access, and much more.

While the conversion itself is automated, manual preparation of a conversion project is necessary. This can take minutes to weeks, depending on the size and complexity of the application. This work includes:

Once this up front work is done, the conversion is a repeatable, automated process. The outputs are ready to run and require no hand-editing.

Once the up-front work is done, the automated conversion is run as a batch job. This can take seconds for a trivial test case of a few dozen lines, or hours for an application millions of lines in size. Early phases of the conversion read and analyze the schemata and source code, producing abstract syntax tree (AST) representations of these constructs. Thousands of conversion rules are then applied to these ASTs. This conversion logic analyzes, annotates, replicates, or otherwise transforms these ASTs in a pipelined process which eventually has gathered enough information to produce a Java replacement for the application.

The FWD conversion identifies ABL statements, built-in functions, methods, and attributes used by an application. It recognizes higher level constructs as well, such as transactions, resource scopes, and common code patterns. For each of these, an equivalent Java code pattern with one or more API calls to the FWD runtime environment is emitted into converted code.

Some amount of refactoring is done, to the degree possible without compromising the essence of the program's control flow. For example, temp-table and UI frame definitions are extracted from procedures and emitted into discrete Java interfaces and classes. Converted business logic references these resources. With input from developers, dead code can be identified and removed as part of the transformation of the application.

The primary inputs to the automated conversion process are: 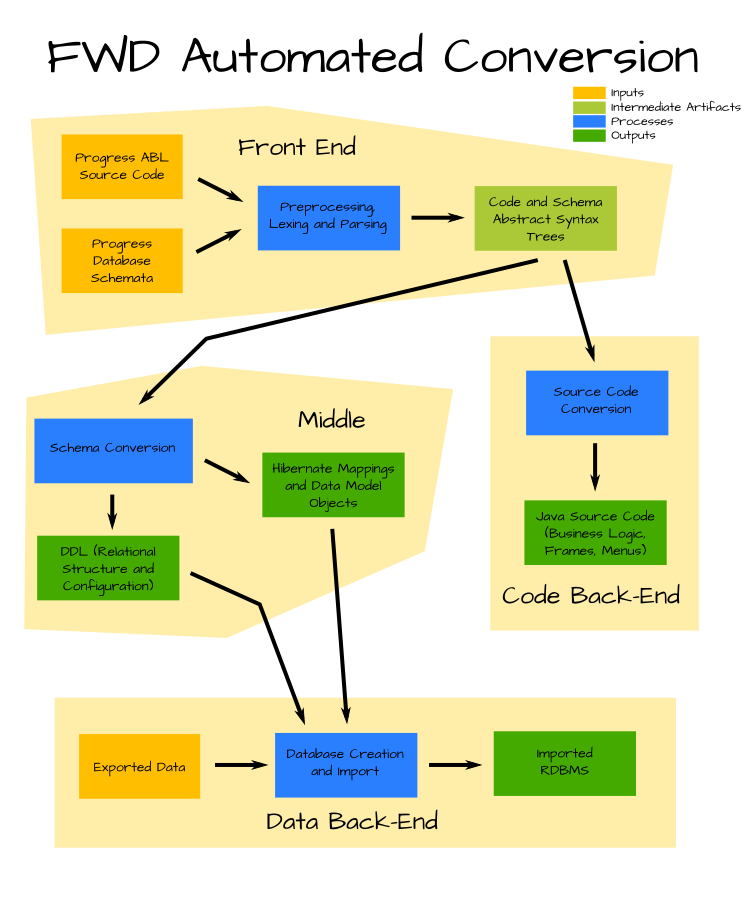 The primary outputs of the automated conversion process include:

As noted above, the middle phase of conversion generates the DDL necessary to create a new database instance in a modern relational database. Once data is exported from the associated Progress database, the outputs of the middle conversion phase can be used to import that data into the new database.

Like conversion, data import runs as an automated batch job. The time this job takes to run depends entirely upon the amount of data to be migrated and the hardware available. The import process is multi-threaded to take advantage of multiple CPUs, but it is also I/O bound, so some testing will be necessary to find the ideal throughput.

The high-level design of FWD's runtime environment is depicted in Figure 2. 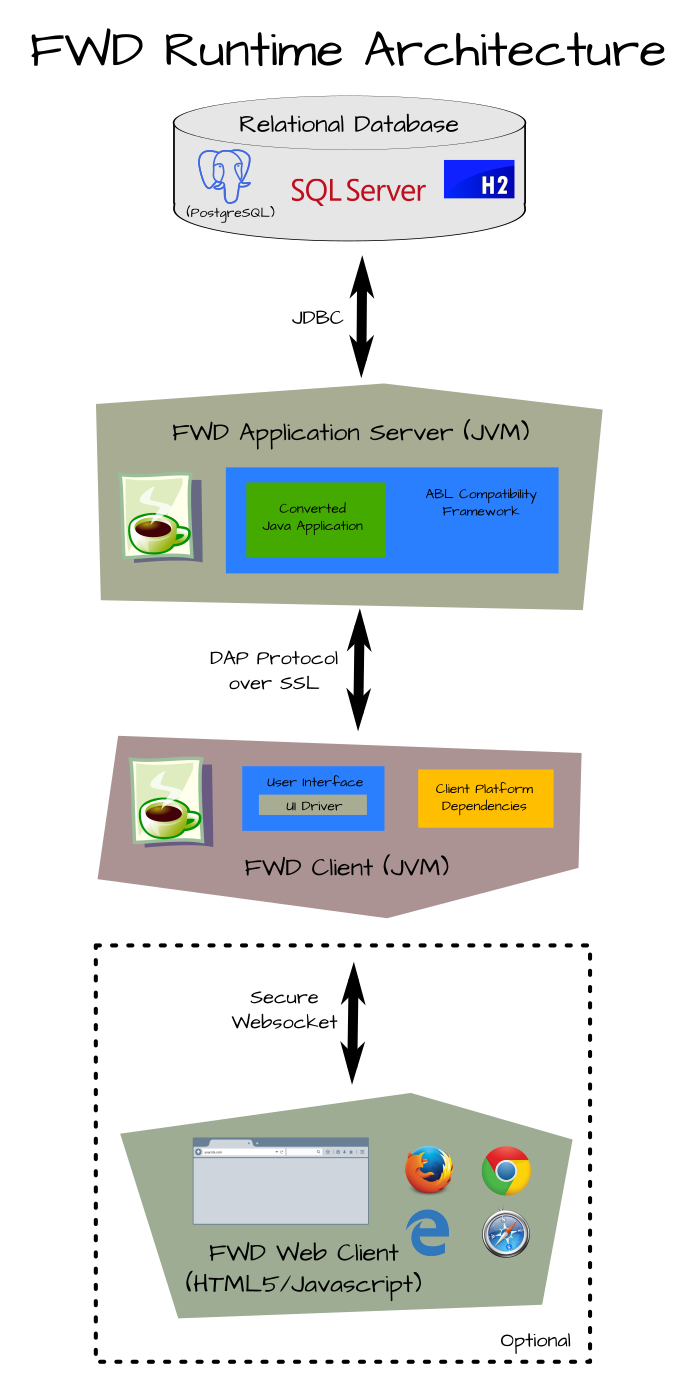 Thus, if the application operates on a GUI screen, the runtime renders that screen identically in a web browser and executes the same logic, but with Java and JavaScript. If the application opens a database transaction, populates buffers, changes records, partially undoes that unit of work, then commits, the FWD runtime does the same. However, it uses Java and a different database back end, such as PostgreSQL.

As can be seen in Figure 2, the converted application resides within the server. In the FWD runtime environment, all business logic executes on the server, even for applications with a user interface.

The FWD client is a thin presentation engine, which manages only interactions with the user and those low-level operations which must occur in the context of the client system. These include file system access, process launching, and other operating system level operations. This design allows a high degree of shared infrastructure among the various, low-level client drivers.

If you are interested in further information regarding the FWD conversion process and runtime infrastructure, please refer to the online documentation.